Affectionately known as the red river by locals, the river Medlock should have stopped shocking me long ago. Through the last two years I have seen prolific chub fishing, a pollution incident that all but wiped that out . Then the demolition of a prominent weir changed the whole shape and flow of the river rendering my favourite swim, and indeed the swim that started the whole blog, unfishable. I have witnessed a fox trying to catch ducks swimming in the water, and today cormorants all along the Vale.
But days like today happen when least expected, and generally when you are at your least prepared. Being my first trip this year I travelled light, expecting little action after the recent snow water. No camera and just a fold up landing net. Today was really a chance to get back into the swing and check what bits and bobs needed stocking up. 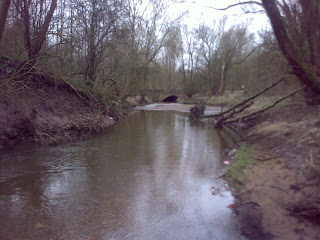 A couple of hours on the Vale did nothing to change that opinion. Before the demolition of the weir this stretch had some really obvious fish holding areas, but now there are few fishable spots, and even these seemed barren today.The banks have taken a bashing this year with the constant barrage of water and the river has really taken on a different shape. 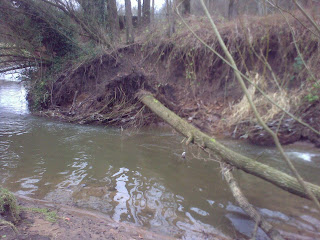 After a couple of fruitless hours I decided to move downstream to give it one last hour in a swim behind the Etihad stadium. I generally find it difficult to blank on the Medlock but today looked like it was heading that way, but the move proved fruitful and the trout began devouring my double white maggot offering freely. 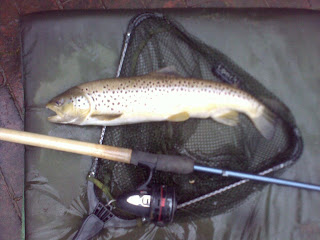 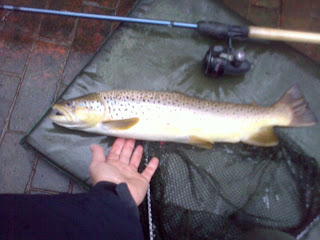 Not small fish either. With no scales or camera today and having to rely on my mobile phone to get photos, I will leave the guestimation to you as to the weight of some of these beauties, but let me tell you,  every fish fought like a trojan today, and had I not had the help of a passing Lithuanian lad on the landing net some of these fish may not have been banked. His English may have been broken but his amazement at the size of these fish was most apparent. It was nice to have some company in an otherwise desolate inner city location, even if he did tell me he had spent three months of his seven month stay in England in HMP Forest Bank for possession of a knife! He did play it down though, telling me in Lithuania they carry big knives (indicating the size with his outstretched hands in much the same way I describe my fish), without a problem.  Anyway he offered me a beer out of his rucksack, so in my book he seemed like a decent lad!
Now there can be no logical explanation why a monster like this lives in a red brick culverted stream (hence the local name), with a river bed comprised of 70% sand and 30% used sanitary towels. But after a twenty minute scrap due to fear of the fish slipping free from my tiny size 20 Kamasan 511 barbless hook, this beauty finally came to the net. 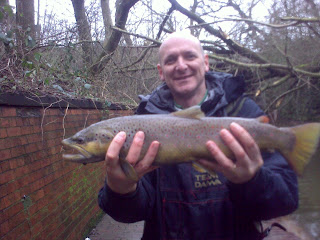 Whatever weight this fish was, it gave me the thrill of the year so far and was worth it's weight in gold. look at the colouring on its fins, and the muscle behind its gills. This has to be the biggest trout I have banked from the Medlock. I would guess this fish was in the 4-5LB range. I know it filled the landing net. This is the reason I continue to focus my fishing on urban venues. People travel, and pay good money to catch a fish like this. My bet is they live in most rivers in Britain but rarely get fished for in some of the grimier locations. As the rain closed in and the bites dried up, seven fish to the good, I packed up and headed back through the park, climbing the gates (really at 47 years old!) and headed to the car. I said goodbye to my Eastern European friend, who happened to have the same name as me. As he headed into the City centre I headed back to the relative comfort of suburban Manchester and home to a  plate of Polish hams, sundried tomatoes and olives and a glass of Chardonnay. What a way to begin my fishing year.
Posted by Meddy Man at 08:54 5 comments: