Chub in the City

Last week I wrote about the lads dropping on the Irwell and catching a few fish and all week I have regretted not taking my gear and having a go myself. Well today was the day, and to say I have been eagerly waiting to fish the River Irwell is an understatement. I knew exactly where to go as I had watched every fish caught last week, so armed with a couple of pints of white maggots and a pint of casters it was my turn to defy the odds and try to catch some quality fish.
Dropping on the pegs that did well last Tuesday proved fruitless and two bite less hours later I decided to move downstream to the deeper slower water, stopping on the way to try a couple of likely looking spots. I managed to catch a trio of small brownies  before dropping on the swim I have fancied for months.  I have spent time on the river watching huge shoals of chub on the edge of the city centre and know they are there in huge numbers.
After climbing down to water level I waded downstream to the deeper water. A word of warning at this point, if you are going to wade in a big river like this make sure there is no rain about. Even today the water level rose during the last two hours sufficiently enough for me to call it a day before darkness fell.
First trot down on a finely shotted stick float brought a beautiful chub of around 2lb. The fish  continued to devour my offerings all afternoon and early evening, and I ended up feeding nearly 3 pints of bait. I weighed my final net in at 29lb comprising of mainly chub and roach. I did catch a couple of small bream and a larger brown trout. The sport was fantastic, and all this in the City centre. It was amazing how I could tempt bites just a rod length from where I was wading. A better angler would have bagged double my tally, but I aim to keep improving. This was my best day on any of the local rivers, and makes me wonder whether I will ever bother travelling any distance in future with such sport on my doorstep.


I would estimate the biggest fish at around 3lb but didn't weigh any individually due to wading in the middle of the river. Gave the local ale cans on the other bank something to watch in the evening, in fact I seemed to draw quite a few astonished glances as passers by stopped to watch the net slide under fish after fish. I will definitely be back before too long. These days don't come along too often, really put a smile on my face.

Getting through the Minnow

Tuesday saw a return to the Meddy for another crack at the chub. Armed with all manner of baits I was brimming with confidence. Dropped in at Ashton angling supplies on Crowhill for some maggots, which really are quality bait. This tackle shop is my idea of heaven, cleanly merchandised, well stocked, and next door to a fantastic cafe. What more could a man want? maybe some free bait for the plug on this World famous website! To cap it all, this shop opens at 6.30am on a Sunday until 10am for all your bait supplies if you work on the Saturday. Not sure whether the old dear at the cafe next door bothers to mirror these opening hours though!
However today turned out to go nothing like the previous visit on opening day. Aside from loads of the little fellas pictured below getting a bite of any larger fish was a real effort.

The minnow were on the feed and in almost every swim I tried. No sooner was the bait in the water the tip was flickering as the maggots were demolished by these tiny fish. I am convinced they would eat as many maggots as you could throw at them. They were not shy of the larger hooks or heavier line either. I tried pellets to get through them but with no chub on the move everything I tried was proving fruitless. Aside from a couple of small trout, minnow were all I could catch. If I had taken a whip and light lines I could have built a tidy catch of them. Hard work though when you know there are big fish lurking.
I did finally settle on a swim that was devoid of them though and finished up with eight trout, none bigger than 1lb though.

﻿So the fishing was not up to its usually high standards today and nor was the weather. I had to endure some heavy persistent showers throughout the day, which managed to dampen my enthusiasm as well as my mobile phone, which is now unrepairable due to the wet, but not my head due to the new Trekmates explorer hat from TK Maxx which lived up to its waterproof guarantees. This hat is quality so get down to your local branch and treat yourself whilst they are half price.
With little appetite for more fishing I did pick myself up for the Salford friendly anglers meeting in town in the evening. Tonight's meeting was to be followed by a fish-in on the Irwell. I decided to leave gear out to dry at home and watch some of the boys tackle a proper river. I was not to be disappointed as they managed to winkle some quality fish out of the river in the limited time before darkness fell, the highlights being a 2lb 14oz bream and a 2lb plus trout. Seeing these fish caught from a river that is generally shunned by the fishing population really cheered me up again. It will be a long time before the Irwell sees such a large group of anglers descend on its banks in one small area.
After embarrassingly having to borrow the landlord's mobile phone in the Dutton arms to summon my lift home, I reflected on a mixed day over a couple of pints of Hyde's real ale, and concluded that despite all the ups and downs, roll on Sunday to do it all again.
Posted by Meddy Man at 13:03 1 comment:

The season opens in style

Today saw the first day of the new season and what a day it turned out to be. Despite adverse weather forecasts which , with the exception of two short lived downpours, proved to be wrong, the day turned out to be glorious. The fishing matched as well. Found a new tackle shop today as well which is much nearer to the Medlock, and opens Sundays, Ashton Angling Supplies. I went to get some maggots there first thing, and was greeted by the manager with "Do you want a brew?". Now in my book that is customer service at it's very best. I had aimed to do the first cast at midnight thing  this morning but decided against it , preferring a good nights kip.
Anyway after a quick bacon buttie it was on to the Medlock. It looked fantastic. The greenery on the banks and the trees was a stark contrast to the winter, and the river though low had a nice muddy tinge to it. 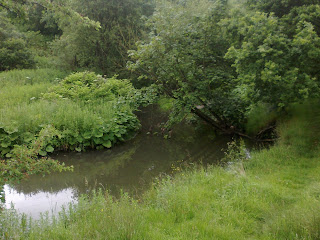 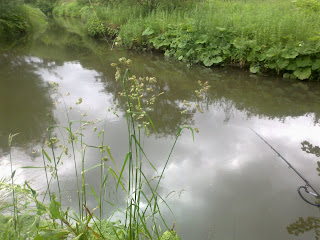 So the anticipation was immense as I settled on my favourite swim under an overhanging tree at the end of a long deep bend in the river. I have had some decent chub from the roots of this tree and it wasn't to disappoint today either. Within a minute the tip was pulling round in typical fashion, the fish were hungry. After missing a couple of quick bites I then hit a good wrap on the tip and was into a lump of a fish. It was not hanging round either. It dived for the roots several times before I could steer it into the open water. Then it came into view, and I had a personal best chub from the Medlock in my sights. The relief as I slipped the landing net under it was immense. This was a cracking fish. Weighed it at 3lb 4oz. What a start to the season. 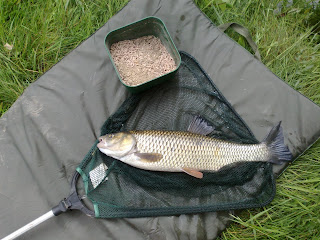 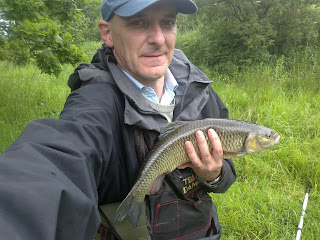 Simple double white maggot on a size 20 Kamasan 911 hook had accounted for this chub and the tiny hook was dwarfed by the fishes huge lips. After a brief pause to consider my catch it was back in to try for another. Immediately the tip was on the move again and I had a nice brown trout that fought all the way to the net. 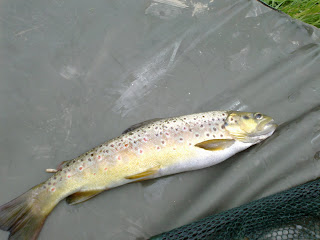 As always on the Meddy after a couple of fish the swim tends to go slow, so it was time to move downstream to a swim that has yielded some huge trout in the past. Again almost immediately after banging the maggot feeder in I had a strong bite and hooked into a good trout. Now these river trout move at a speed unlike anything from the canal, and stopping them getting into the trees is a job in itself. This trout was having none of it and it managed to get into the roots and break the hook from the line, on 4lb 12oz hooklength as well!  Undeterred I know they go big in this swim I put a larger hook on and put back in. Two minutes later I was into another, but much bigger. The fish jumped and it was a huge trout. Bigger than anything I had caught over the winter. I bullied the trout away from the trees and kept it in open water by yielding huge pressure on the rod. After a prolonged battle it was in the net. Forgive the photo it really does not do it justice. This was a monster, just over 3lb. 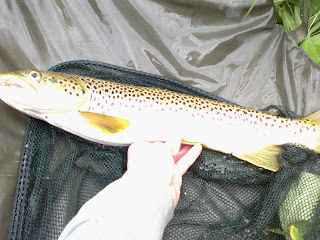 Then came the rain. After the prolonged shower I moved upstream around a few swims catching in each. I caught another large trout later in the day pictured below. 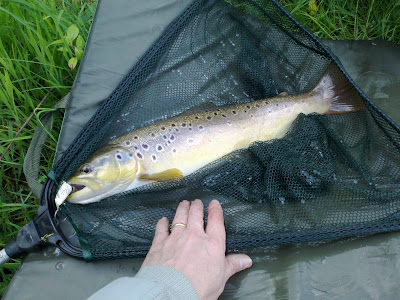 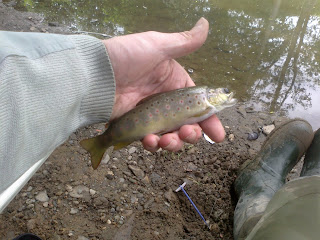 All in all a great day. I finished up catching nine trout and a couple of chub, a great return for a river that resembles nothing more than a stream in most parts. I had taken all manner of particle baits but didn't use anything other than the humble maggot in the end. The three month wait had been worth it. Today I also saw plenty of small stuff from off the bridges, which bodes well for the future, both trout and minnow.  I will get back to the river on Saturday evening to try to tempt some bigger chub on mini boilies I was reluctant to use them today, as the big trout were active. Until then tight lines everybody. 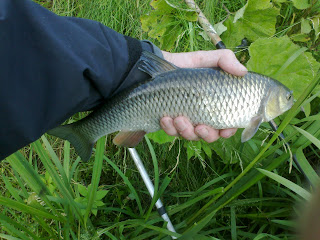 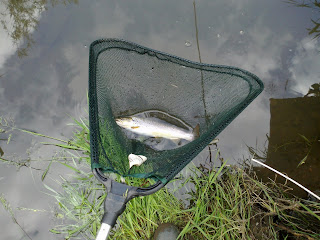