The grand plan fell apart this week. Tuesday was to be a day trying pastures new, however as with most plans at the moment, it didn't happen. Oldham angling had no maggots late afternoon Monday and it was too late to nip to Gilders in Failsworth. I wouldn't mind had he not chewed my ear off , telling me he had stocked maggots for sixteen years, when I asked if he did bait the previous week. Then to top it off I got home to be reminded by my better half that it was double discount day at Asda for colleagues in the morning, which meant shopping before fishing. Bowing to the pressure, Asda it was, and after a quick visit to Gilders for bait I finally arrived at the river late morning, ending up on the Medlock in Clayton vale. Only caught six trout of various sizes, nothing big, and really struggled on the usual hotspots. Funny day really, freezing water, dark mist early on, then beautiful sunshine in the afternoon. Must have confused the chub as I didn't have one decent wrap round on the tip. 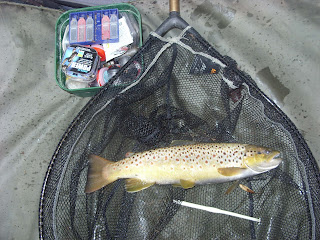 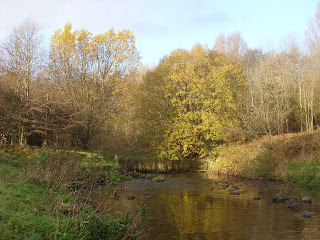 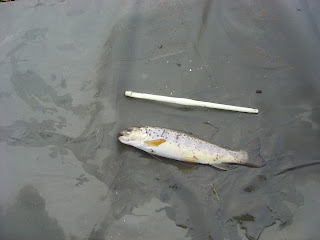 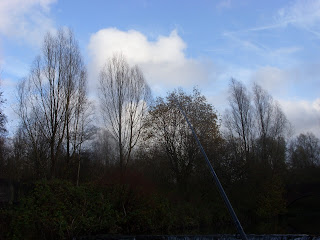 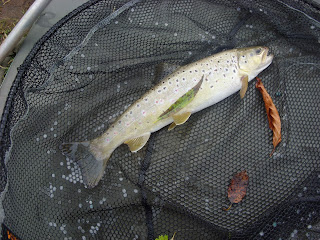 Today I ventured into the city centre to try one of my favourite swims on the Medlock at Potato Wharf. 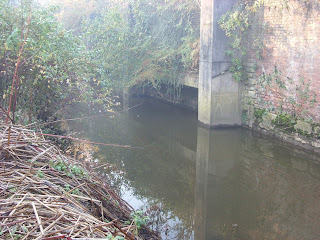 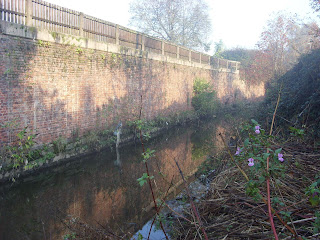 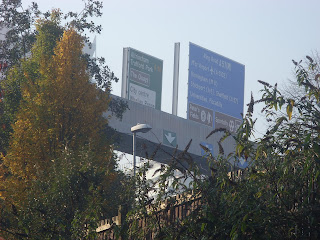 As I had to drive through Clayton to get to town, I decided it would be rude to pass the Clayton Cafe without stopping for another large brekkie. The fishing started badly, and my patience was stretched to breaking point. There was a large snag on the river bed which quickly accounted for three feeder rigs and 5 hooks. After an hour of this and no bites it was decision time. This swim is a Summer swim, but it is nearly impossible to access then because of brambles and thick undergrowth, but I would doubt I will try it in the winter again.
So it was back to the Bay Horse, where midweek I had caught a few chub. This section comes with it's own jungle to negotiate, looked fantastic today as the sunshine broke through. 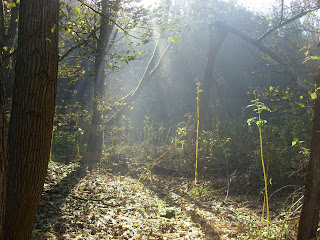 What an inspired decision. Not only was it averaging a fiver an hour in lost tackle at Potato Wharf, but first cast I was into a decent trout. These trout know how to fight, and it was to huge relief the fish finally came to the net after a prolonged battle. 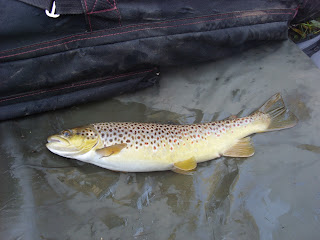 Another smaller, but no less welcome trout came to the net before the first decent chub of the day showed up. 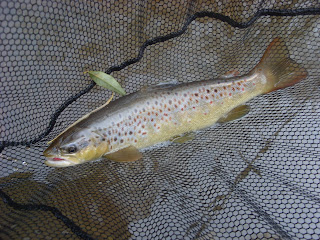 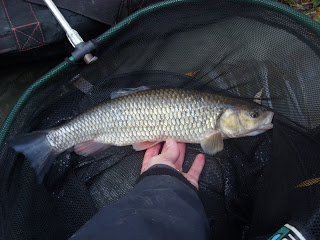 The bites were uncharacteristically slight on the tip, just little knocks. Maybe the fish were affected by the big frost, and the water temperature , which was noticeably colder today. My feet were feeling it as I was stood in the margins all day. As I was missing more knocks than hitting I switched to stick float tactics. The result was instant. First trot through the swim brought a fantastic bite, which preceded a fine scrap with what turned out to be a probable personal best chub from the Medlock. For a river this size these fish seem totally disproportionate, what a clunker. 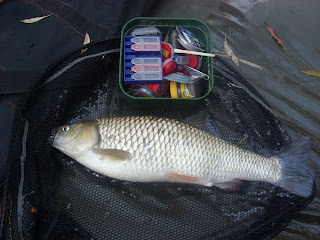 I fished until sundown but couldn't top the chub. What a wonderful afternoon after a shaky start in the morning. I exercised some self control today as I headed back past the pub to the car, although the second chub was worth celebrating. 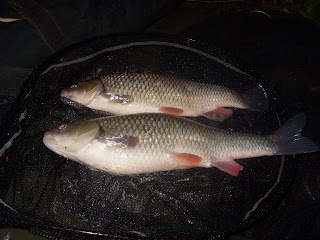 Great end to a decent week. No fishing next week as England have a couple of friendly matches, including a chance to test ourselves against the World champions. No chance to take the rods as the family tag along to Wembley these days.
Posted by Meddy Man at 11:12 2 comments:

After last weekend's frenetic session on the Ribble it was back down to earth, well back to the Medlock to be precise on Wednesday. My gear was still damp and my holdall sodden after the tidal episode, but my enthusiasm was far from dampened. Proud of my efforts the previous weekend I was more determined than ever and had my explorer head on. The first job was to find a new cafe near to the Medlock for a decent breakfast.  Mission accomplished in the Clayton Cafe, the large breakfast comes highly recommended. 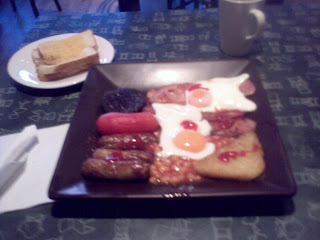 ﻿Experience has taught me to get a good feed before arriving on the river as the water quality in the Medlock is not to be trusted. Having already experienced an infected finger through cutting myself whilst fishing, I certainly wouldn't chance eating food whilst fishing the Meddy.
Today I had decided to find a new swim and headed upstream down the side of the Bay Horse inn. It didn't take long to find a fishy looking swim, fallen trees, deep hole, smooth glide. I wasn't to be disappointed.  I set up on the tip with a 20g Kamasan black cap maggot feeder, an a sliding rig with a size 18 Kamasan B911 to 0.13 Preston power hooklength. Any slighter hooklength and the big trout will find it's beaking strain. Today was not to be about big trout though, although the first fish was a lovely lean brownie, I went on to catch three nice chub up to 2.5 lb in the first couple of hours before the swim died in true Medlock fashion. Below is a picture of one of them, I will add a photo of all three during the week when I receive a new usb cable for the camera. Forgot to take a memory card. 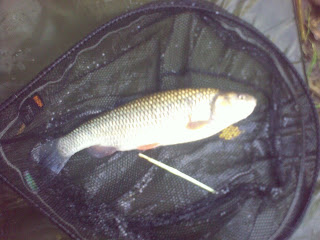 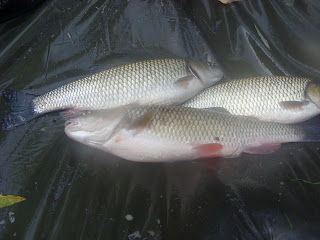 I made a move downstream,  only after stopping for a sit down in the sunshine for a break, and some refreshment at the Bay Horse, I felt obliged, although I did receive some funny looks sat outside the pub in my waders, with my gear propped against the table. 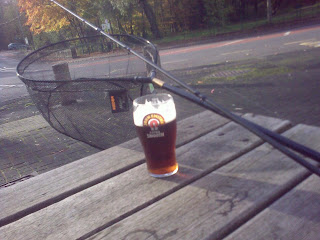 I moved to a swim that generally throws up a few chub, but only managed two more small trout before the light dipped. Another angler came by though and it was good to chat to somebody else like minded. More importantly he tipped me off that there were perch further up the valley, which has got me thinking..... 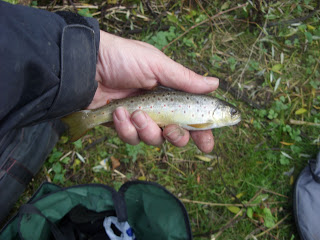