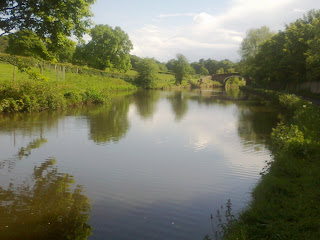 On Sunday we headed north for a change to the Leeds- Liverpool canal in Chorley based on info given to us from a colleague. We decided on a late start due to our inabilaty to get going after a Saturday night out. We arrived at the canal after having to resort to the GPS on my phone after getting lost following the route planner, and were pleasantly surprised at the scenery that awaited us. 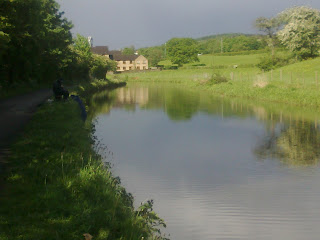 Unfortunately the fishing was not as exciting. I did manage to catch though after the fish homed in on my groundbait. The weather was awful, rainy, windy, and thunder and lightning, and saw to my brolly which was unable to withstand the sudden gusts of wind that kept blasting up the cut. Wound up with two skimmers, one of which jumped back in the canal before the camera could catch it, one roach and half a dozen perch. I will be back though as I like this place. 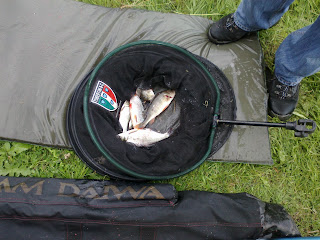 To add insult to injury, after packing up we got back to the car to find ourselves blocked in the lane by another car. After waiting to see if the owners were about to return, we realised nobody would be out walking the canal in this weather, I decided to knock on the nearest house and ask if the car was theirs. The guy that answered was not impressed as he was busy getting ready, and his reply was a firm "No" and he slammed the door. There was only one thing to do, bump the car down the lane and out of the way. As we were about to lift the rear of the car the same fella appeared and put us on to the owner , who lived in a mansion opposite. He obviously realised what a miserable git he had been, either that or he realised it would take more than a small hatchback to keep a couple of angry Mancunians penned in!!
We knocked on the house opposite and after initally disowning the car, the lady realised it was her son's girlfriends car. I think she parks it in the lane as a Toyota hatchback does not fit in with the Porsche and Audis parked on the drive. Anyway it was a genuine mistake and panic over.
So we were moving again, but I wanted to take a look at a small swim on the River Yarrow I had spotted on the way in. There was only a little water in the River and the fish were easily visible, some nice sized ones too. One for June I think. I don't know where the time is going to come from to fish all these river swims I am aiming to empty. 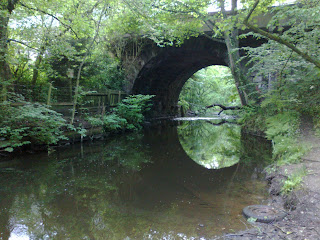 Anyway as is tradition on our Sunday trips Andy got the Kebabs in on the way home after his uncharacterisic, yet still pitiful blank, (which I tried desparately not to mention) at a select little establishment in Little Hulton whilst we listened to the aftermath of the United v Chelsea match on Talksport. Even the Kebabs were a bit of a half hearted attempt, never mind.
Posted by Meddy Man at 02:29 No comments: