Popped into town to drop off Bethan at Piccadilly and thought I would have a look at the Meddy. Blimey there is no water in it. Really low at the moment. Had a good walk through Beswick and didn't see a single fish. Then we went down to Potato Wharf to see if the fish had moved in for the Summer. Sure enough there were thousands of Chub and perch in the river. So it was off to Sainsburys for a loaf of basics white bread and back to treat the Medlock's residents to an impromptu lunch, chub, roach, perch, ducks and all. 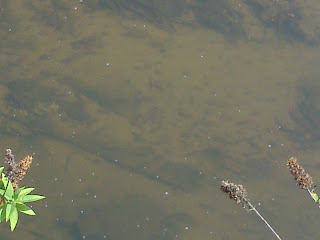 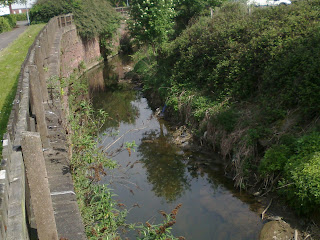 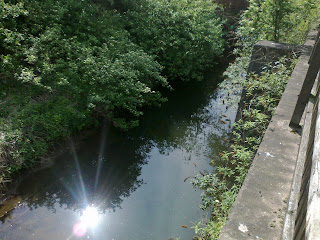 Becoming more of a fish spotter these days than an angler. Spent Sunday watching chub on the Irwell under Trinity Way in Salford followed by a stroll around Drinkwater Park lake. No fishing to report this week, hopefully I will get my head back in gear next weekend and try something a little different on the local canal.
Off to Ewen fields now for the Hyde v Droylsden derby match. The end to another exciting weekend.
Posted by Meddy Man at 05:48 No comments:

Took a seventy mile drive south today to finally fish a canal I have been wanting to try for ages, the Wryley and Essington canal in Pelsall.. I took every bait under the sun, and even the sun itself obliged, however the fish did not. This canal looks beautiful and I was convinced I was in for a good day. Unfortunately it wasn't to be, however I did manage a few bits. Tried all over the swim but really couldn't get them going. 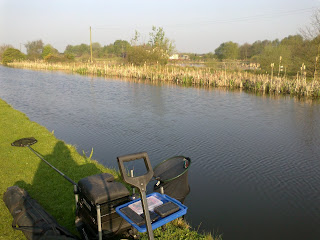 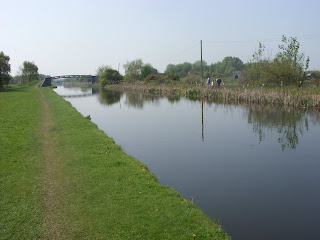 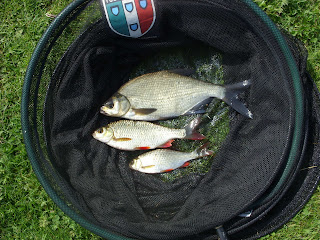 Never mind, another part of the world I have seen. I was very tempted to bob in to the pub which overlooks the meadow we were fishing on, but showed great restraint bearing in mind the frustrating fishing. A couple of other anglers came and went, fairing the same , so we decided to call it a day at around two, in good time to get home and changed and into town for the Salford friendly anglers meeting tonight.
I think I have lost my knack on the canals at the moment. Roll on June 16th.
Posted by Meddy Man at 09:29 No comments:

Finally made it out today for a few hours after an enforced break from fishing due to England's Euro qualifier in Cardiff and the midweek international against Ghana. 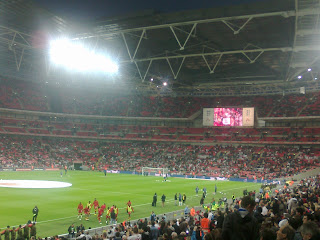 To say I have been excited to get back out could be a little off the mark, as I cannot muster the same enthusiasm for the canal as the River. However I rounded the pole gear up and headed to my favourite stretch of the local cut with Andy in the hope of a few decent roach and perch. Even on a bleak, rainy spring day this is a pretty stretch of canal, you could be forgiven for not knowing you were in Manchester on some of the pegs on this canal. 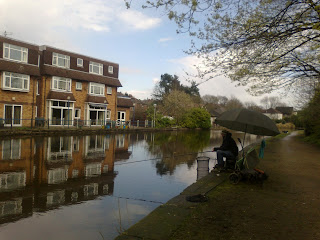 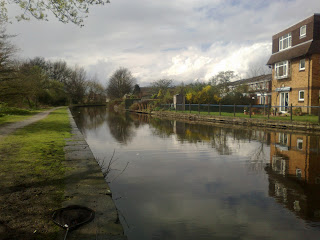 It was nice to get back out in the fresh air, if not a great day's fishing. We both caught however, Andy catching three fish including the pretty Bream below. He managed to winkle these out on the tip rod after arriving to discover he had left his pole at home, not the best start. 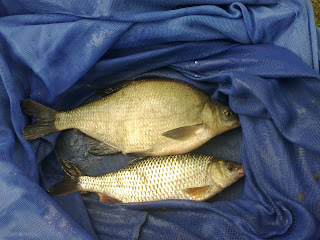 I managed the catch below. Eight small roach, a small skimmer, and a tiny perch. Not a great bag but a start. I caught all the fish across at 11 metres on maggot, with the exception of the perch which took a maggot close to the near bank. We had plenty of chopped worm but the fish didn't want to know. 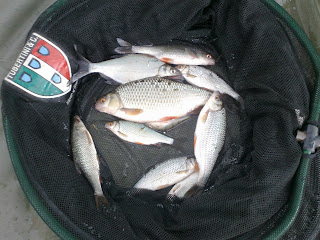 No fishing midweek but we are going to get back on the canal next Sunday with a little more preparation. There are some decent fish in this canal so lets hope next week fishes a little better.
Posted by Meddy Man at 11:21 2 comments: