I returned to the Medlock today after some deliberation as to where to head this morning. I felt more trepidation than anticipation after seeing the river in a terrible state last time out. Today was going to be pivotal, I hoped some fish had found safe havens as whatever flushed through the river worked its way out of the water system. As I neared the river I encountered a new obstacle, a herd of cows and bulls blocking the footpath. Brave I may be, but I hastily decided to head back to the car and head 3 miles downstream to Clayton vale rather than take on this lot. 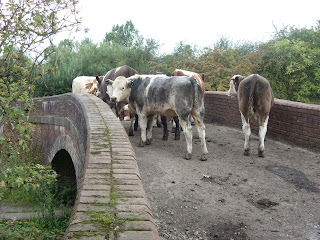 So I arrived at Clayton to find the river low and clear, but clean. As I walked through the Vale I looked at various swims but could see little sign of life. Then I approached a long glide that I have fished a number of times earlier in the year, and as I crept up to the bank through the jungle like vegetation I spotted four big chub. They swam across the river slowly to the deeper water. My heart was racing as this was just a dream a few weeks ago. I tackled up and dropped a small bomb, so as not to spook the fish, close to an overhanging tree on the far bank. 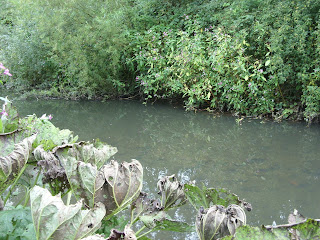 I generally drop a feeder in but the water was really low today and I wanted to keep it light. I catapulted a dozen or so maggots in and settled in to wait for a wrap on the tip. I didn't have to wait long for a thumping bite. I struck to find the drag on my reel was set poorly. The fish was a huge trout which shook the hook as soon as it dived for cover. At least there was life in the river, I was back in business. The next cast to the same tree brought another mighty thump on the tip. This time after a brief fight a pristine Medlock chub of around 2lb was in the net. 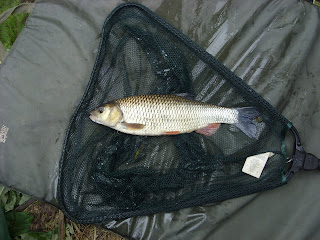 After losing another large fish the swim quietened for a while but after twenty minutes or so the tip pulled round with some force. This fish was bigger and stronger. It peeled off line as I tried to halt its run down stream and turn it towards the net. After a good battle the fish finally came to the net, still fighting to shake the hook. It was a big brown trout, bigger than the chub. 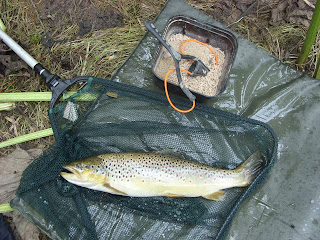 As ever, after a scrap like that it was time to move to another swim as these Medlock fish tend to spook easily. I landed below the weir and decided to tackle the weir pool that generally only throws up small trout. Not today though. First cast another big brownie. Luckily there were some lads passing to take a photo. They couldn't believe what they were seeing as they had not considered this river through Manchester's outskirts contained much else than shopping trolleys and tyres. 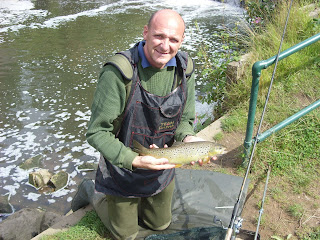 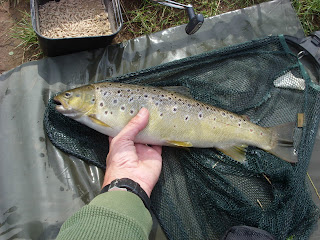 I proceeded to catch another half dozen trout of varying sizes and a small chub out of a swim that I hadn't thought contained much other than minnow and small trout. On losing my third feeder to a snag in the pool I decided to call it a day, a  happy man. 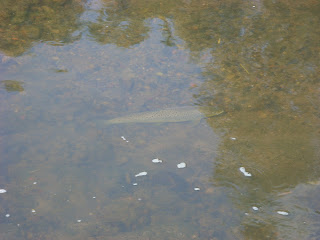 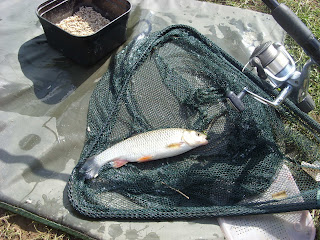 Sunday sees me tackle the Irwell again. I wandered round the lower reaches last weekend and have found a few likely looking spots to choose from. I am hoping to bag another bumper net by way of consolation for missing out on tickets for Tottenham v Man City after deciding to make the journey down south. Should have gone to the ticket office before fishing today not after, lesson learned there. Never mind, Harrogate tonight to see Harrogate Town v Droylsden. What an exciting life!
Posted by Meddy Man at 09:04 5 comments:

It was time for our annual pilgrimage to the Myramar Castle Beach Hotel in Fuengirola. Funny thing is the Rio de Fuengirola runs right by the hotel down to the seafront and I threaten to wet a line every year but never do. The river is chocker full of fish, as we feed them every night on the way to the town. This year though I packed an old Mitchell reel, some wagglers, decent hooklength line and a bit of terminal tackle. Taking no space in the bags at all it gave me the option should we see a cheap rod for sale. Imagine my surprise to find Decathlon had opened an outlet 200m up the road from our hotel complex. Fantastic I thought, even better I picked up a telescopic course rod complete with a decent enough reel for the princely sum of 11 euros. 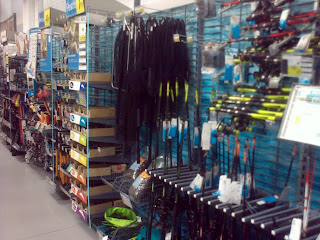 Now I was rocking. A tin of sweetcorn from the local hypermarket and I was ready to go.
This river comes with some unusual creatures to avoid catching though, there are dozens of turtles resident that also feed on the nightly banquet provided by hundreds of passers by throughout each evening. There is also a family of rats which have realised the food on offer here is easy pickings. My fear of Mr ratty has long since diminished after numerous encounters on the river Medlock over the years. 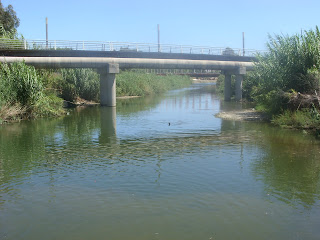 I found a great clearing in the trees on the opposite bank to the residence of Mr Ratty's family and cast a 2AAA waggler mid river. The first bite was instant, and immediately I connected with a fish. Would it be my first Mullet? After a brief but good scrap my first Spanish fish was on the bank. It was a small Barbel. Amazing really, for years I have struggled finding barbel and I travel annually to a river full of them. Not a river Dane type monster, but my first . 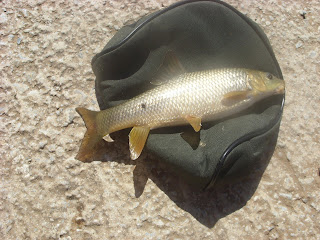 I continued to catch steadily all afternoon, all small barbel with the exception of a single mullet, which was another species I have never caught previously. 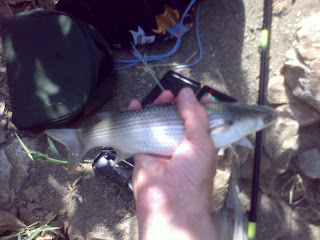 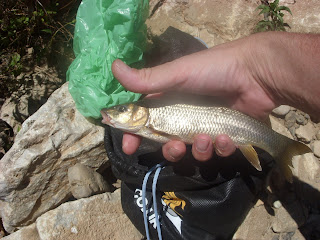 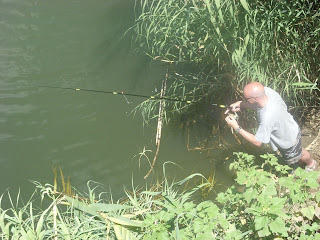 I only hooked two fish of note, one running into the undergrowth and slipping the hook, and the other, a much bigger fish, diving﻿ and catching me cold, breaking the hooklength. I visited a couple of times during the holiday with similar results, a bite every cast. With so much other stuff to do and see I resisted the temptation to turn the excursion into a fishing holiday. Anyway, there is always next year, as we seem to end up at the same place every summer. Next year I may go for one of the bigger fish that seem to appear in the evening for the leftovers offered up from lunch. These fish eat anything  from bread to cheesy wotsits!
The picture below shows the hotel and is taken from the bridge over the river. Gives you an idea of the proximity to the fishing. It doesn't do the complex much justice, but for anybody looking for a family holiday, with a big pool, 24 hour security, full leisure facilities and entertainment, a shopping and restaurant complex and hypermarket and crazy golf round the corner and the added bonus of the opportunity of a few hours river fishing within a couple of minutes walk, this place comes highly recommended. 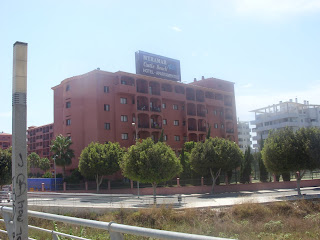 This week I may try the Medlock again, although I fear the pollution may have taken its toll. My international piscatorial forays﻿﻿ continue in Bulgaria in two weeks as I tackle the river Iskar, after finding another strategically placed hotel for the European championship qualifier in Sofia. I have struggled to find much info about this river aside from there are lots of brown trout so I aim to cover all bases (with my 11 euro kit).
Posted by Meddy Man at 03:57 1 comment: