Sunday saw a last foray to the River Medlock to round off what has proved an inspiring season. Josh and myself headed down to the river early as we both had tickets for the FA cup game at Eastlands (within view of the Medlock) in the afternoon. We still had a good few hours to try and winkle a few last chub out before the end of the season.  After last weeks blank, and a barren first couple of hours I was beginning to think I had lost my touch. The river was high but easily fishable and the rain was pouring all morning. As soon as it stopped raining along came the bites.  After losing a trout each, we finally landed some fish. I finished landing a couple of staple Medlock sized trout and a good few minnow, but had to concede defeat to the better angler on the day, Josh. He managed to bag the biggest of the day, a lovely chub, a trout and even managed to catch a minnow twice the size of any of mine. For a young angler he really is determined, and really capable. 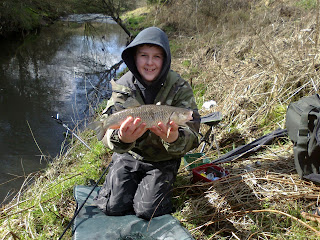 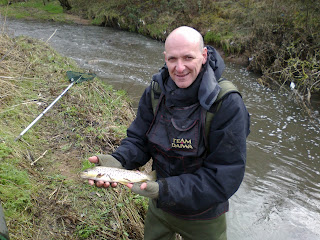 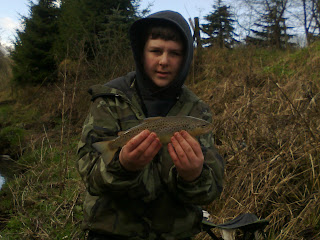 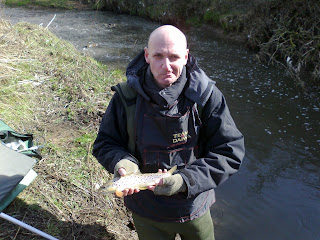 The interesting thing today was that all the fish  (excepting minnow) came from the same tiny swim that we both managed to fish on the maggot feeder. This swim is no wider than 12 feet and at one point you can touch the far bank with a rod. Just goes to show that you never know what is lurking.
So that was the end of the river season and with all best intentions to fish many different rivers, I ended up spending most of my time on the local stream. Next Sunday sees me out on the canals and I aim to visit the local cut, the Ashton canal for my first outing. This place is also little known outside of the local area but really produces some intriguing catches. 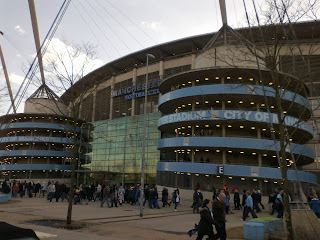 One season ends as another is still in full swing and the afternoon saw us at Eastlands for the FA cup quarter final, City v Reading, for what turned out to be a successful conclusion to the day. A trip to Wembley ensured against our poor neighbours from Trafford. In June I am determined to bank a chub from the river in view of Eastlands. There are some great looking spots around Beswick and Ancoats and I will have a few more evenings spare. I also intend to devote some quality time to the Irwell and the Tame, two rivers that I have fished on a number of occasions  and caught plenty of fish, but no fish of note. Three months to plan my attack, but in the meanwhile plenty of canal action and footy to keep me occupied.
Posted by Meddy Man at 14:55 No comments:

Nice brekkie, shame about the fishing.

Today saw Andy and myself head over to a favourite spot on the River Trent at Rolleston near Newark. Normally a banker this venue for a good net of silverfish and the odd Barbel. I was hoping to land a Barbel to round off a smashing season. Car loaded we headed off, stopping en route at a 24 hour corrugated iron cafe by the A616 on the outskirts of Sheffield. Funny thing was the only people in the cafe were all on their way to various fishing venues, 3 carloads of us. 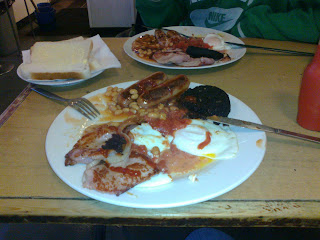 Full up and raring to go we arrived at Fiskerton post office to pick up the day tickets, then headed down the country tracks to the river in the back of beyond. It is getting close to that time of year when the seat box comes out and the gear that you carry that you never use follows you to the canal. I don't know how I manage on the Meddy with a small bag. 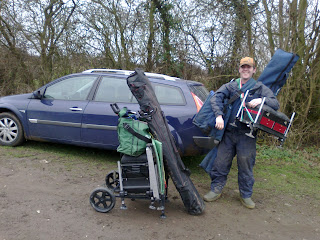 Anyway to cut a long story short, the best bite we had today was in the cafe on the way. We sat on a very high River Trent for 6 hours and neither of us had a bite that we could strike at in earnest. Tried everything that I could in the trying conditions but to no avail. Andy is a very capable angler and he faired the same. Last time we were on we both had 10-15lb of silvers. 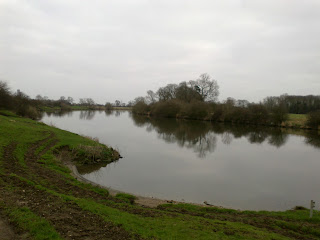 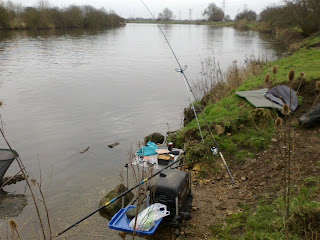 So that was that, I could have walked to the Meddy and probably done better. That's fishing for you, and on a different day we will go back to Rolleston because if nothing else it is one of the most rural parts of Nottinghamshire and is a lovely place to sit in the sun, which actually showed itself for a lot of the afternoon. I think I will stay local for a while now though. I only have two spare days now before the river season ends then it is on to the canals for a few months.
Posted by Meddy Man at 10:51 No comments:

Failsworth birds aren't shy.... nor are the trout!

Today saw me back on the banks of the Medlock around Failsworth, after a break at weekend. A bad day at work on Saturday, a bottle of chardonnay to cheer me up, a hangover and pouring down with rain on Sunday morning all conspired against the lure of the river (couldn't be bothered). However on the plus side it gave me the opportunity to nip into Manchester with Hazel to get Bethan's birthday presents for Thursday, thus freeing up Wednesday to go fishing all day in some better weather. That was the plan anyway and it paid off as the weather was truly delightful today. It also gave me the chance to visit the Micro Bar in the Arndale Centre market food hall to sample some Boggart brewery real ale. If you are shopping in town this place is a must visit, always plenty of real ales on, and surrounded by all manner of food stands with dishes from around the World, my idea of a good lunchtime.
Back to the fishing and  I had some company today on the river , the chap below, feathered, not female as the title may have suggested. This well fed robin stayed around me all day, grabbing the odd loose maggot every now and again, even landing on my foot at one point. It certainly wasn't shy. 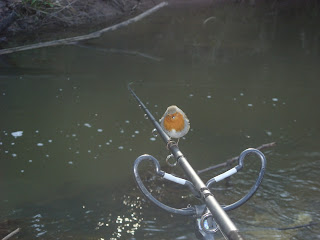 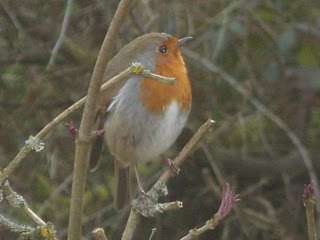 ﻿Today I decided to begin at the waterfall at Brookdale and walk down the valley towards Medlock Valley fishery, a section of the river new to me. I didn't get very far though as the fish were very obliging from the start. Sat under the waterfall I landed two trout on the maggot feeder, both a nice size, a great start and blank averted, I decided to move on as I wanted to try more new swims. I wandered downstream to a swim still within view of the waterfall. What a swim, only a few feet wide but loads of far bank features, I had a feeling about this one. After dropping the feeder in  under an overhanging tree I began to set up my float rod to tackle this swim with a moving bait, which the chub seem to prefer on this river. 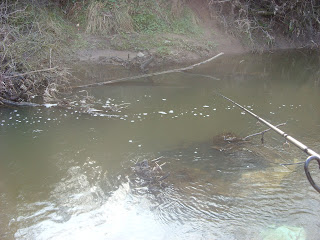 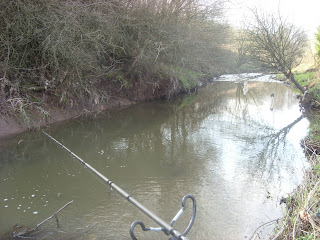 Then something happened that I have never experienced before. As I was threading the line on one rod, my feeder rod was pulled round, and the fish was tearing line off. I reached to strike and the fish pulled the rod off the rest as I lifted the rod butt.  I was unprepared and beaten instantly by a fish that was clearly of a better stamp. One thing I have learned on the Medlock is if you lose one keep going as the swim will generally throw up another bite, and very quickly I was into another fish after a solid wrap round on the tip. This fish was a big one. The power it was exerting on the rod was immense. I had to really pull against the fish to keep it from the barrage of rubbish at the head of the swim, and the bend in the rod was something else. Then after a few minutes of arm aching action the fish was in view. It was a beautiful trout, bigger than anything  I had caught from the Medlock before. The rush of relief as the fish stopped thrashing around, and came to the net was a great feeling. A personal best brown trout weighing in at just over 3lb on my antiquated scales. I really should get some of the new digital ones, but here speaks a man who refuses to pay to park his car (tight!) 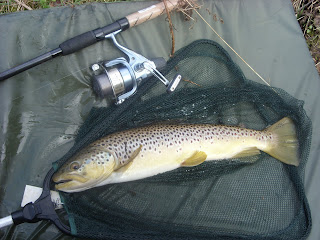 This was a real surprise, although I had been tipped off there were much bigger fish than this at a recent meeting of the Salford Friendly Anglers society by a man who would know. The same fella tipped me off about the line and hooks he uses, and today I was armed with Preston power 0.13 (4lb 12oz)  hook length based on this advice. I am convinced I would not have landed this fish without this knowledge as this line is the business, it must be invisible to the fish. Might buy the hooks Mike next week, thanks again.
I followed the Trout up with a nice Chub of 2lb+ then again I was into another fantastic fish, another 3lb trout, all from the same small swim. This time though an equally big fish the fight was nowhere near as fierce. 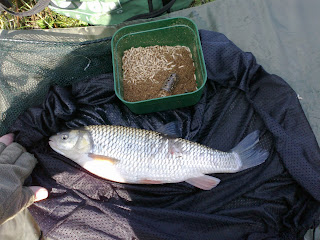 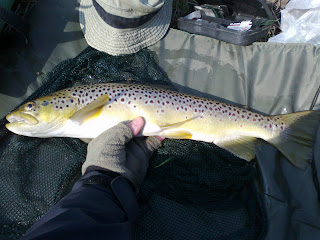 ﻿I managed a few more trout and tried a couple of different swims after the bites dropped off, and a couple of smaller specimens on the tip including a minnow and an even smaller stickleback (another species for the year). 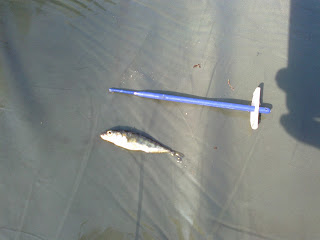 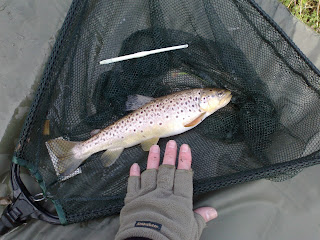 All in all a fantastic day, and my best haul from this intriguing river so far this season, and topped off a busy week. Last week saw a visit to the Kings Arms in Salford, another great real ale destination to attend the meeting of the Salford Friendly Anglers Society, the oldest fishing club in the world. This club supports a great cause and is concentrated on improving the quality of the River Irwell and it's tributaries including the River Medlock. It is free to join and could really make a difference. There is a link at the top of this blog if you wish to learn more. Aside  from supporting a great cause they are a decent set of lads who like a pint or three, and a trip to the river. I did manage one more hangover this week after a trip to the local Catholic club on Sunday evening with Rick, a mate who I go to gigs with, who likes a pint or six!! Good of him to Invite me and make my Monday morning even more unbearable. I think I will stick to fishing for a couple of weeks.